More autumn and too cute

This is yet another random post. It has been (mostly) a beautiful autumn week here. From Tuesday to yesterday it has been fine and sunny, though increasingly hazy and working on a tad of smog. Today has dawned a bit damp.

In celebration of our weather here, well until today, I give you pictures of my commute into town. Yes, sounds boring but I hope I have some lovely shots for you ;-) Then we'll have some almost actual real sorta knitting content! Y'see I got a parcel! It is a luverly parcel too :-)

Oh the glory of the morning mists!

This is the major thoroughfare to the east of Melbourne. It crosses right under Richmond station,w here I swap trains to get a Flinders St direct train. At the top left of the picture is the Nylex clock, a Melbourne landmark for many many years. The mob who own it wanted to get rid of it cos it cost too much to maintain but a heritage order was put on it, so they continue to maintain it as it is.... The pinoaks have coloured up well.

The Southbank footbridge, with BAWOON! The light towers you can see are the MCG's, the seat of sport in Melbourne

BAWOONS set down in Olympic Park - see how hazy it is? The tennis centre, where they hold the Australian Open, is on the left, and the coloured trees in the foreground are in the botanic gardens.

On a different note, my good friend, Dreamcatcher, sent me a little parcel of (mostly) Welsh goodies:

Yep, that is some Fyberspates sock yarn (my first!) in Foxglove and some sheepish souvenirs and a card of weird algal rocky moundy things - most cool! The larger sheep is called Shaun, of course. Thank you, Dreamcatcher!

Cheshire had to come and check it out from an unusual angle:

These little cuties are a bit bigger than my thumbnail. I have given them a very inventive name, not - Mr and Mrs Sheepses. I would run a competition to get them a better name but I haven't finished sending off parcels yet and am feeling a tad poor. LOL. I love 'em and they are likely to grace pictures of any new fibre acquisitions.

Finally, I leave you with a picture of our green-eyed tree monster:

Nutmeg had some Ideas that she would be able to catch the wattle bird in the liquidamber, but really! These birds are smart! Smarter than our little Nut I think.....

I enjoy getting comments but if I don't have your email address, I may not be able to reply 8-\

Popular posts from this blog 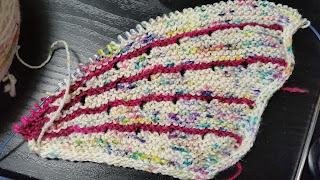 LOL G'day all! Apparently I can no longer blog more than once a month. Mea slacka, I admit. So what's been happening here? I've done a lot of knitting recently.  Ahem I may have bought a fair whack of yarn too.  So much for not spending money. I've been sick as a dog this week.  Gah.  I haven't been really ill with a virus for years - last time I was this sick was six years ago.  Man that was a fun month, DH having lost his job whilst we were getting new visas in Oz for said job, having to pack up and move everything we wanted to keep from the States, sell off the car, get rid of stuff.... all with me coughing my lungs up.  And the lymph node that came up that I thought was from a chest infection actually being breast cancer...  oh joy oh bliss. I even went to urgent care (the walk in, no appointment needed doc in a box that you see when your GP is booked out) cos I felt so crappy.   He confirmed it was probably viral and threw a heap of meds (not ABs)
Read more 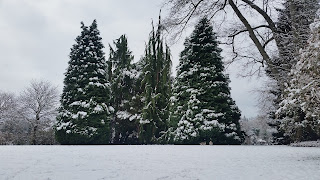 G'day all! 12 is a big number around here, being all to do with Seattle Seahawks and the 12th man - did you know that American football has 11 players active on the ground at any one time and the twelfth man is the spectators watching the game?  I didn't.  I know about the 12th man in cricket but not this thing that has been adopted here regarding what I usually call gridiron. But I don't want to talk about American football and I don't want to talk about 12, I want to talk about six. Yes, we have now been in Seattle for six years (and a number of days). Six years. Where has the time gone? This is our seventh winter - how have we managed?  Some people love gloom but we are solar powered.  And Seattle tends to be rather gloomy in winter.  I manage by making stuff like crazy, I wear bright colours, and I hang out online on Ravelry.  Without my rav mates, I'd be bored out of my brain.  I'd get a job but I don't have a work permit and that means no
Read more

January 07, 2010
I don't have much good to say today. I don't suggest you read what follows. . . . . . . . . . . I really do mean it. . . . . . . . . I went to the doctor today to get the last part of the puzzle of my cancer. I am a complete mess. I am trying to think of positives - I need some positives. My breast cancer is triple negative. Along with the grade III, poorly differentiated cells and aggressive nature of my cancer, I am losing hope for a good outcome (ie a cure). Tamoxifen will not help me. I was so hoping that it would be estrogen positive cos everyone I know who has had tamoxifen has done well. I have to set my sights lower. Heck, I'll be happy if I am in any shape to make it through next Christmas. It will be a miracle if I am still around in five years, let alone still around and healthy. Every box that can be ticked for a bad outcome is ticked on my pathology report. How much more of this can I take? I have serapax to try to calm me down but I am not game
Read more